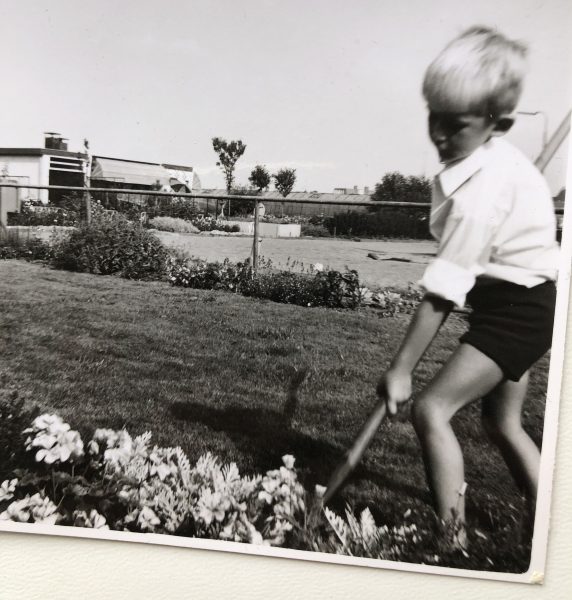 I grew up in the largest glasshouse area of the Netherlands, the ‘Westland’, and my father was a flower grower. While working long hours during the week, one of his greatest joys was to spend his Saturdays working in the ornamental garden around our house – possibly also to avoid a catholic household with eight children. From time to time I would help him by weeding, or mowing the grass. Typical for his generation, he was forced to quit school at the age of thirteen, which had frustrated him a lot and I think that is why he would show off his knowledge of the latin names of plants from time to time. I feel blessed that I spent my childhood in a rural area with loads of space, few cars on the street and nature always nearby. I cannot pass a well-designed garden without wondering what my father’s opinion would have been. 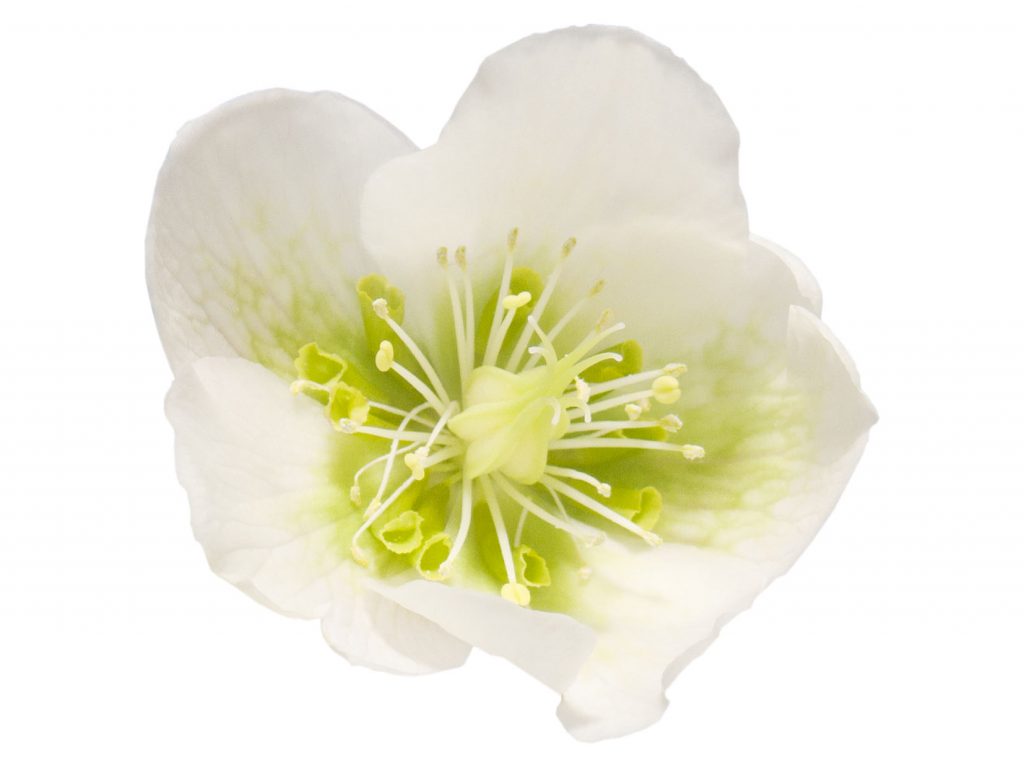 All through 2020 I’ll be writing some of my thoughts on flowers and flower patterns.

Flowers are soothing, especially in times such as these.

In my first years as a textile designer, I steered away from flowers as far as possible. I thought floral patterns were too much of a cliché for me to use. Freshly graduated from artschool, I considered clichés were the enemy! In my defense I have to say that in the 90’s pattern was very much out of fashion. The French word ‘dessin’, that we use in Dutch for pattern design, provoked very strong negative reactions among designers, even among most of my colleagues when I started teaching at the Royal College of Arts in Den Haag (NL).

Funnily enough I would always have one or more flower bouquets in my home; but I just could not connect that to my design practice.

As far as I can recall, it was the introduction of digital printing in the textile industry that made me change my mind. Since then I have made many flower patterns for textile and wallpaper industry, most of them based on photos I made. 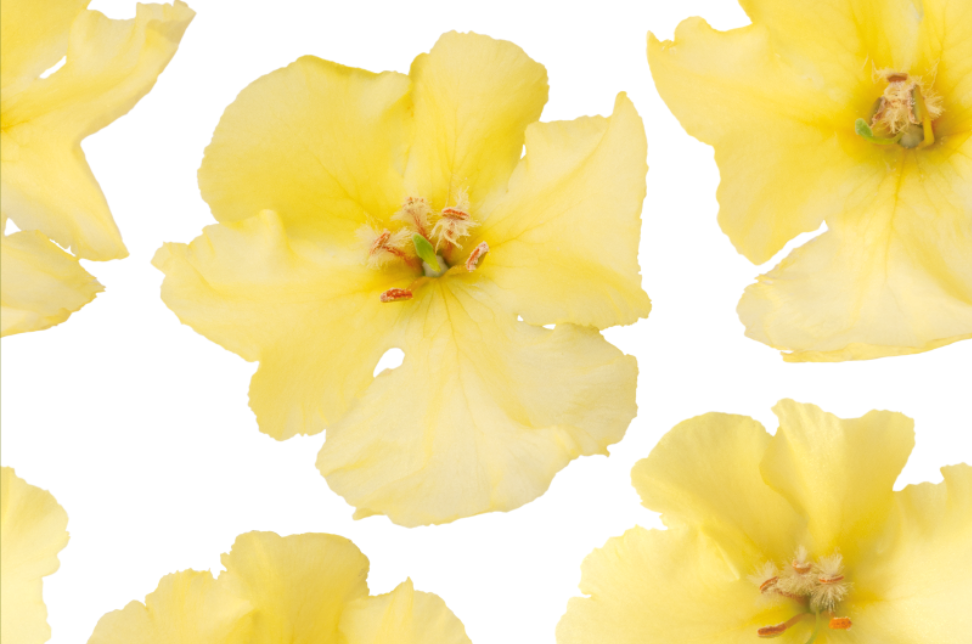 I work with two digital cameras; a pocket Panasonic and a Sony reflex camera with a Sigma macro lens.

I have never invested in expensive cameras for want of more pixels. Even though some digital printing mills boast to work with a resolution of 600 dpi, I found that for textile and wallpaper 254 dpi is really enough. Sometimes the enlarging op photographic elements in a pattern can give a blurry effect, but it has never bothered me, as long as the brightness of colors is not compromised. Actually I often find it renders a painterly quality to the image. And then there is always the rule that the larger the scale of a pattern, the more people tend to look at it from a distance.

Recently I built my own light box with two LED lamps, which means I can have a lot of light on the flowers without creating sharp shadows. And the more light you have, the more you can play with the aperture (adding more depth of field).
Obviously, when using a macro lens you need your camera to be fixed to a tripod, and use a self-timer.
Don’t worry; it will not get more technical than this… 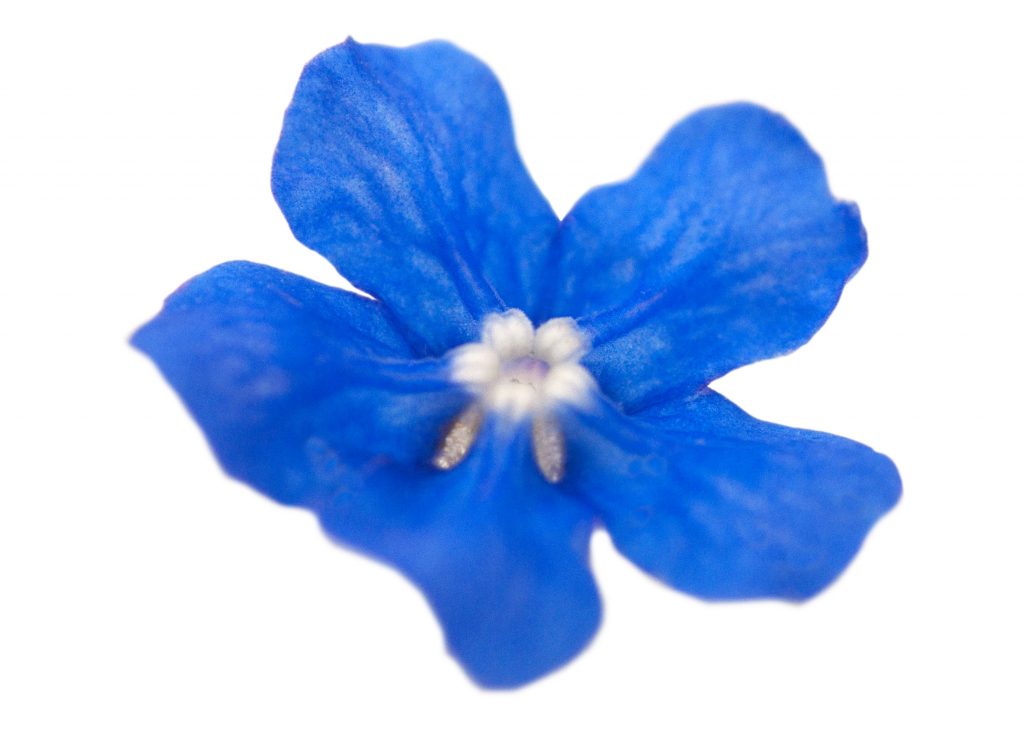 The cliché of a flower is the daisy; a round heart trimmed with petals, on a straight stem. This is how children will draw a flower nine times out of ten (and very likely with a smiley in the heart). For a designer it is not a very inspiring thing…

On the other hand there are flowers that are so atypical or bizar that I find them hard to use in a pattern as well. Every type of flower is beautiful in itself, but not all types are suited to be used in a repeat, in my experience, let alone to have on your wall day in day out!

I have thousands of unused photos on my computer of flowers and plants that I came across in nature or bought in flower shops, was totally intrigued by, but never found a way for to apply. On the other hand there are flowers I can very easily use; for instance dahlias, peonies, parakeet tulips, helleboris, or lilies. With some of those it is purely the shape of the flower, with others it is also the shape of the plant, the buds, the leafs, the curves of stem and branches, the way the branches are positioned on the stem. Some of these flowers have been used in pattern design for a very long time, up to centuries, and with good reason. Flower varieties that have gained an iconic status are in general easier to apply, as appropriating them can be done with very subtle elements. 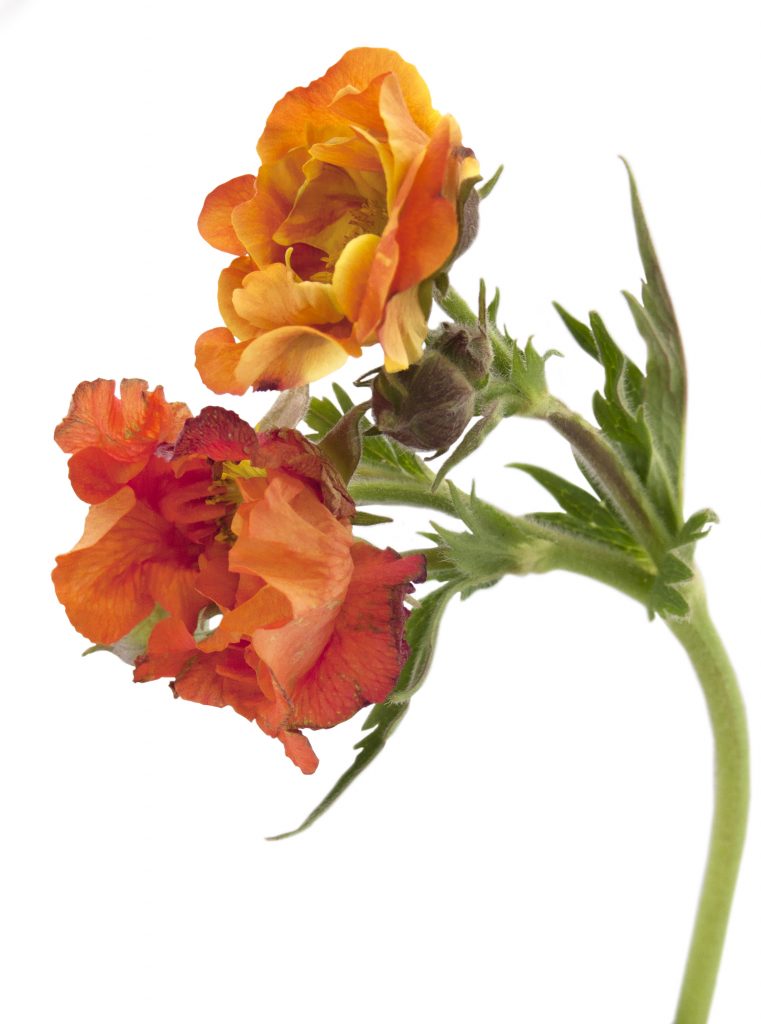 The colour green. When I am spending time in nature, I thoroughly enjoy all the different hues of green. In pattern design, however, I am not particularly fond of the colour. And yes, I do know that green is fashionable at the moment. When I am designing with particularly outspoken flower shapes and colours, I will most of the times try to leave out the green parts, like stems, buds and leafs. Fortunately there are also plants that have other colours than green.

Flowers from the flower shop nine times out of ten will have a straight stem, and that is another reason to not show them; they may be too dominant in the pattern and tend to make patterns unidirectional, which in general is OK for wallcovering or curtains, but hardly so for upholstery or carpet.

Keeping and using the green parts of flower or plant can give the pattern a botanical connotation. Including the names of the plants in the pattern clearly refers to the herbarium, something you can only do every once in many years. I have found that it can work to include stems and leafs when the flower looks like it is a wild species and has been picked by the roadside a moment ago. 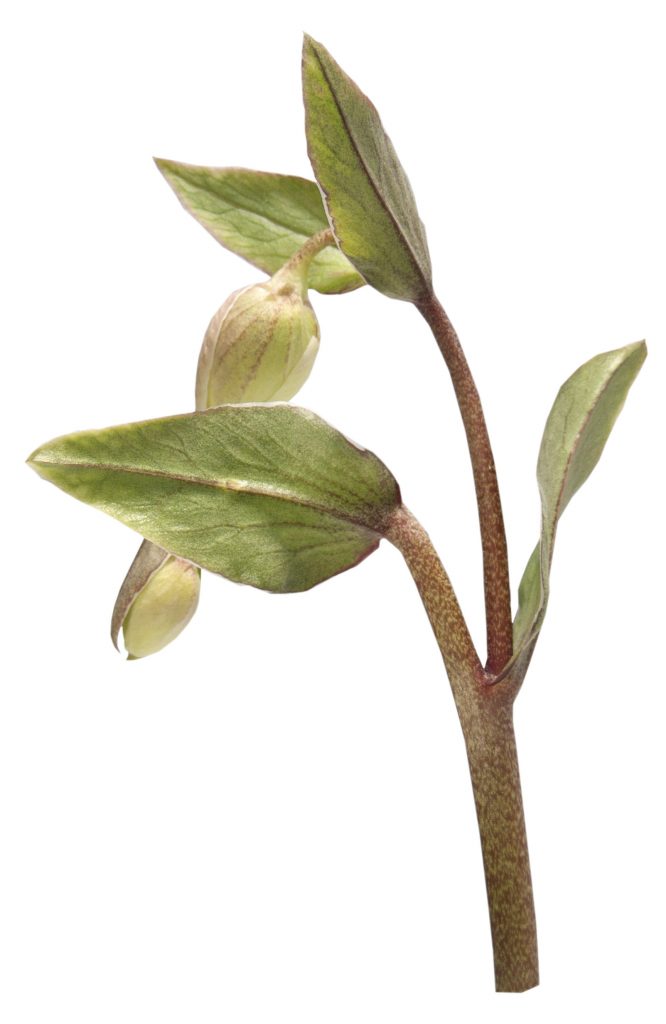 When I have found new flowers that I want to work with, I photograph them one by one, from different sides and different angles; from above, right in the heart and then slowly going down, making photos from the side and even from below. It is really possible to make an interesting pattern with several photos of only one (interesting) flower.
Besides of the flower, I will also always make separate photos of buds and leafs in different stages. Often I do not use them, but it is a small effort that can turn out to be very helpfull.
I may use Photoshop to edit minor irregularities, but there is one rule that I always follow: never add leafs or elements from other species to your flower.

Allthough – having written that, I suddenly get new ideas… As a designer I guess one should never say never. 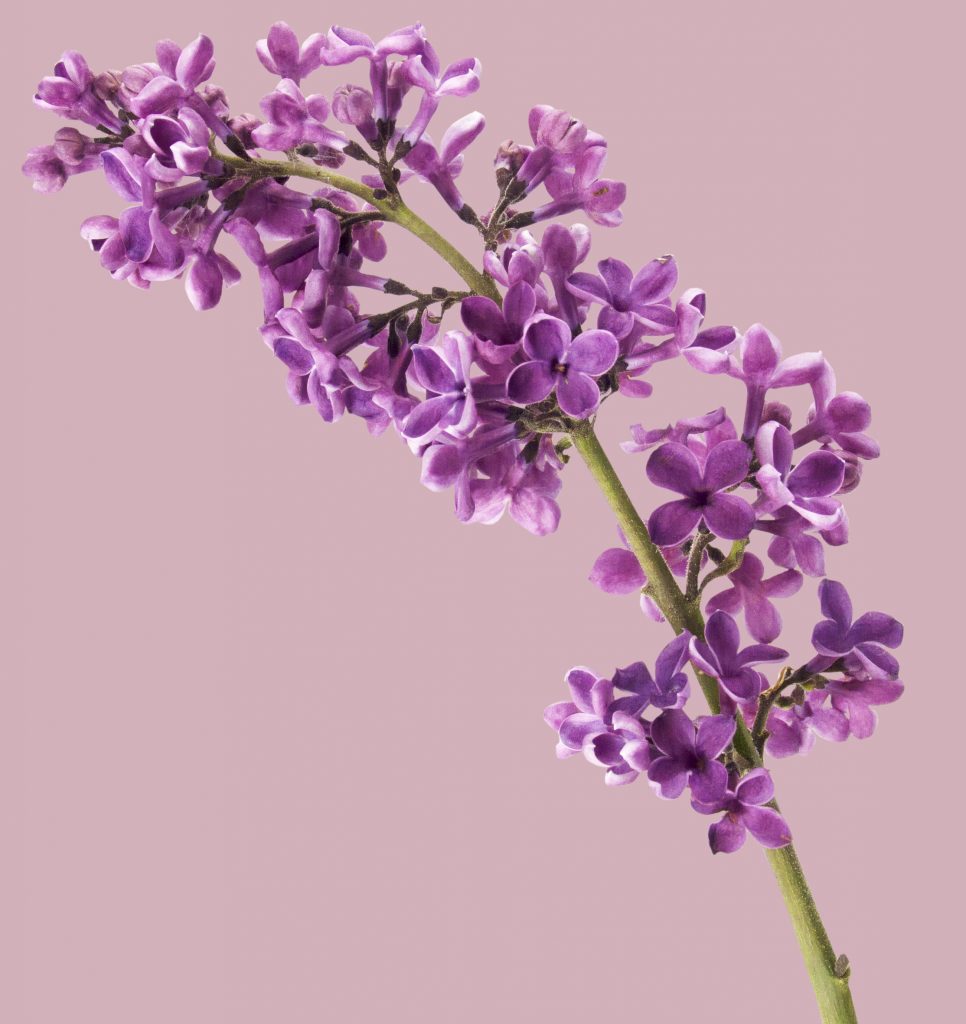 No matter how perfect the color of the background on my flower photos, I will always remove it in Photoshop. The reason for this is simple; I want to be totally free when positioning the different flowers and elements next and in front of each other. Also, working with a transparant background enables me to add (artificial) shadows to the composition. And lastly, after all the hours of work put in a composition it would be silly to not present the design to clients with different options for background colors.

Always when presenting the final design, I show the pattern on full scale, and next to it some suggested other color schemes. In those examples I not only play with the background color, I may also add a texture, or ‘tweak’ the colors of the flowers themselves (mostly just subtle changes). Where some designers like their colors to be very bright, I often fall for a less saturated version of my floral patterns, giving them what the Americans call a mid century look. 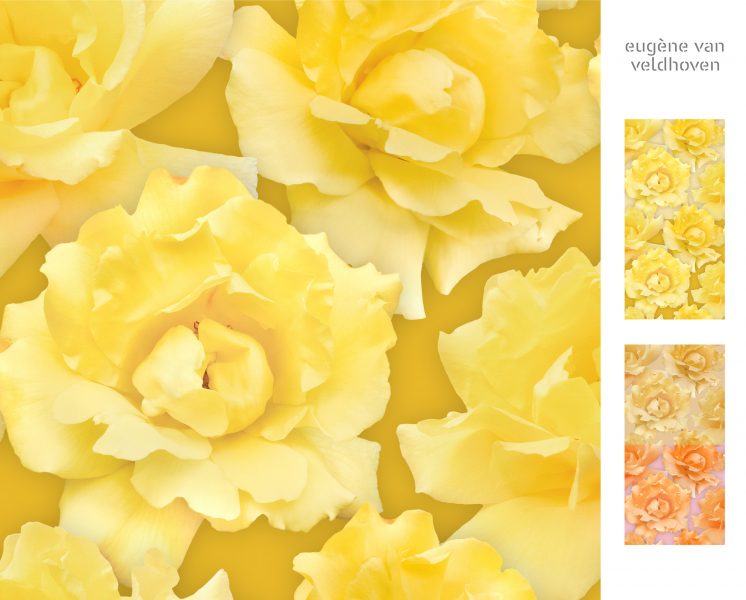 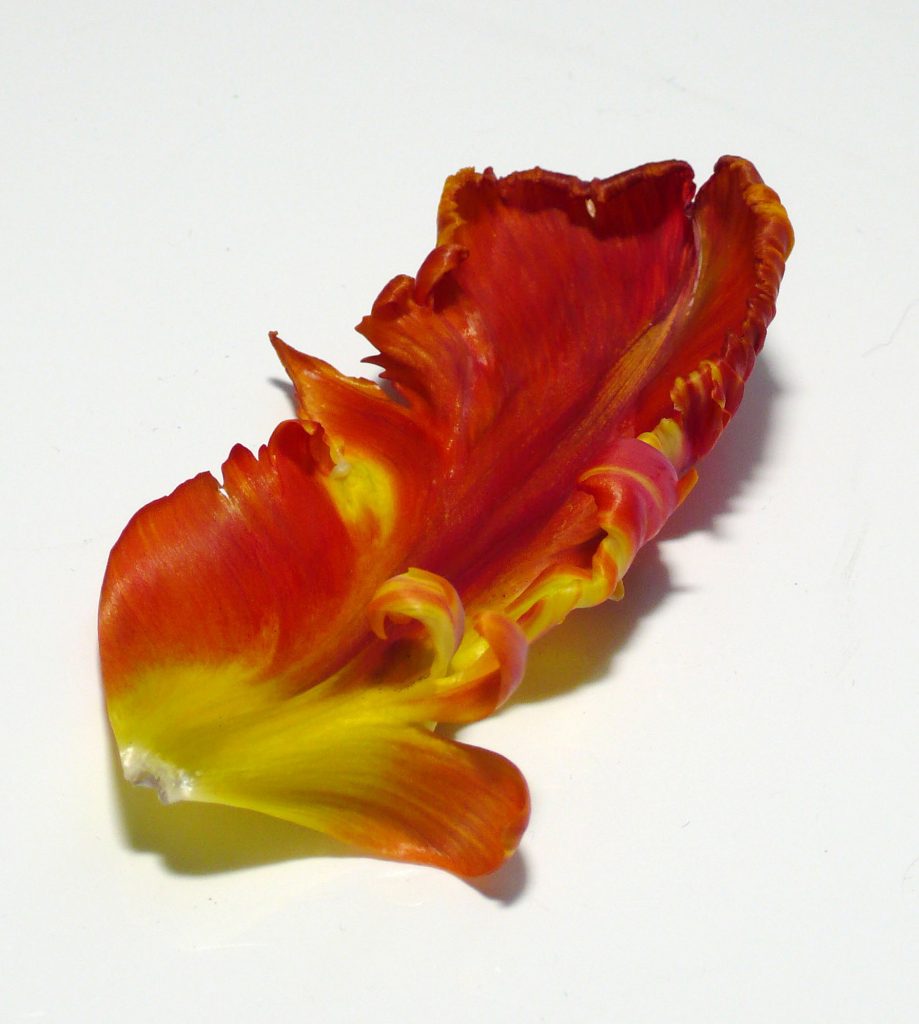 Beauty in decay
A perfect flower, or a perfect photo of a perfect flower, may be good promotional material for a flower shop, but as an aesthetic image it can become somewhat sterile. I have had long conversations with fellow designer Onno Raadersma about whether or not to digitally cover up occasional wilted leaves or brown spots (what Photoshop was designed for initially, I guess…)
Back in art history class I was always fascinated by the so-called ‘memento mori’ in paintings; reminders of the inevitability of death. Most common would be a skull somewhere in the composition, but it could also be a bug in a lush bouquet of flowers.
I am not principally against adding or taking away some details in a photo, but I always check if the character of the flower is not compromised by it. It is tempting to keep working on an image, until you zoom out and suddenly realize you have taken it too far and the flower has lost its character. It is very inspiring to look at traditional Japanese paintings of nature; they know best about keeping the tension between irregularities and harmony. 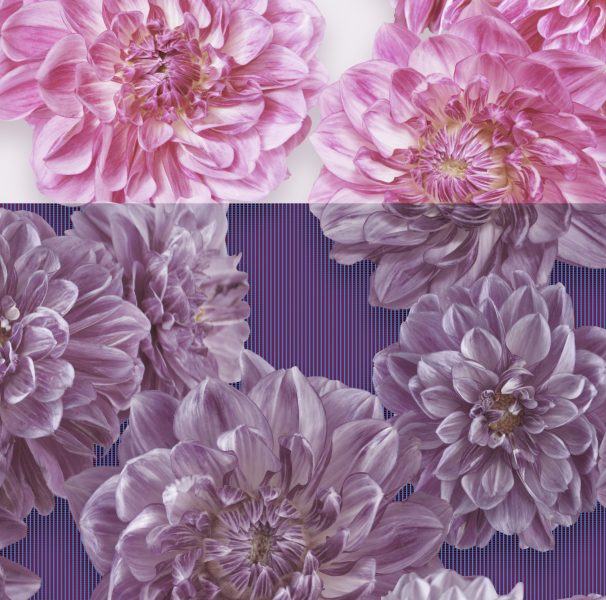 Stock photos.
I pride myself on only using photos I made myself or that were made especially for me.
Not only is it the best way to be sure to have photos of all the different elements of the plant, from different angles ánd in the right resolution, it’s also a great way to study the flower or plant while photographing. And – very important – a great excuse to spend time in nature…
In my view it gives a very poor pattern when designers reuse the same photographed flower, only changing the scale, flipping and mirroring it. Only exception is when a repeat is built up of really many small flowers.

I tend to make all my photos in my studio, unless I come across flowers while traveling, or I find rare flowers in the fields. In that case I only shoot photos when there is no wind, and the sky is clouded (to avoid sharp shadows). If not, the photos will never have the required quality and will only frustrate me every time I come across them on my computer.

I realise that living in the Netherlands, the country producing most flowers worldwide, is an advantage..! 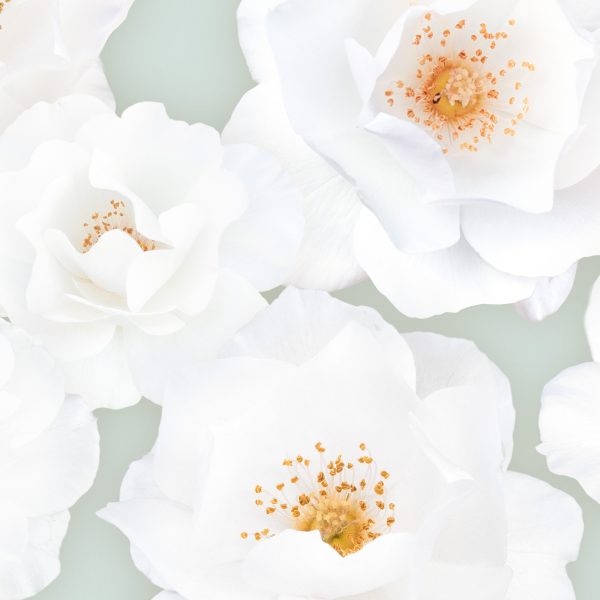 Roses
I am tempted to say there are flowers and there are red roses.
There is a whole industry working towards Valentine’s Day and millions of people will buy red roses, thinking they’ve checked all the right boxes… For me red roses are such a platitude that receiving them would be a reason for me to consider ending a relationship. I am not kidding! Also it reminds me of the single roses in lots of plastic that are sometimes being sold in restaurants. And then all the songs and sayings about roses and thorns – I like to steer away from that as far as possible.
I have been told there are people who only know one type of flower by name and that will always be the rose.
HOWEVER… I do like wild roses, ramblers, dune roses, hybrid roses, pale pink or yellow tea roses and wilting roses – with those I can work.